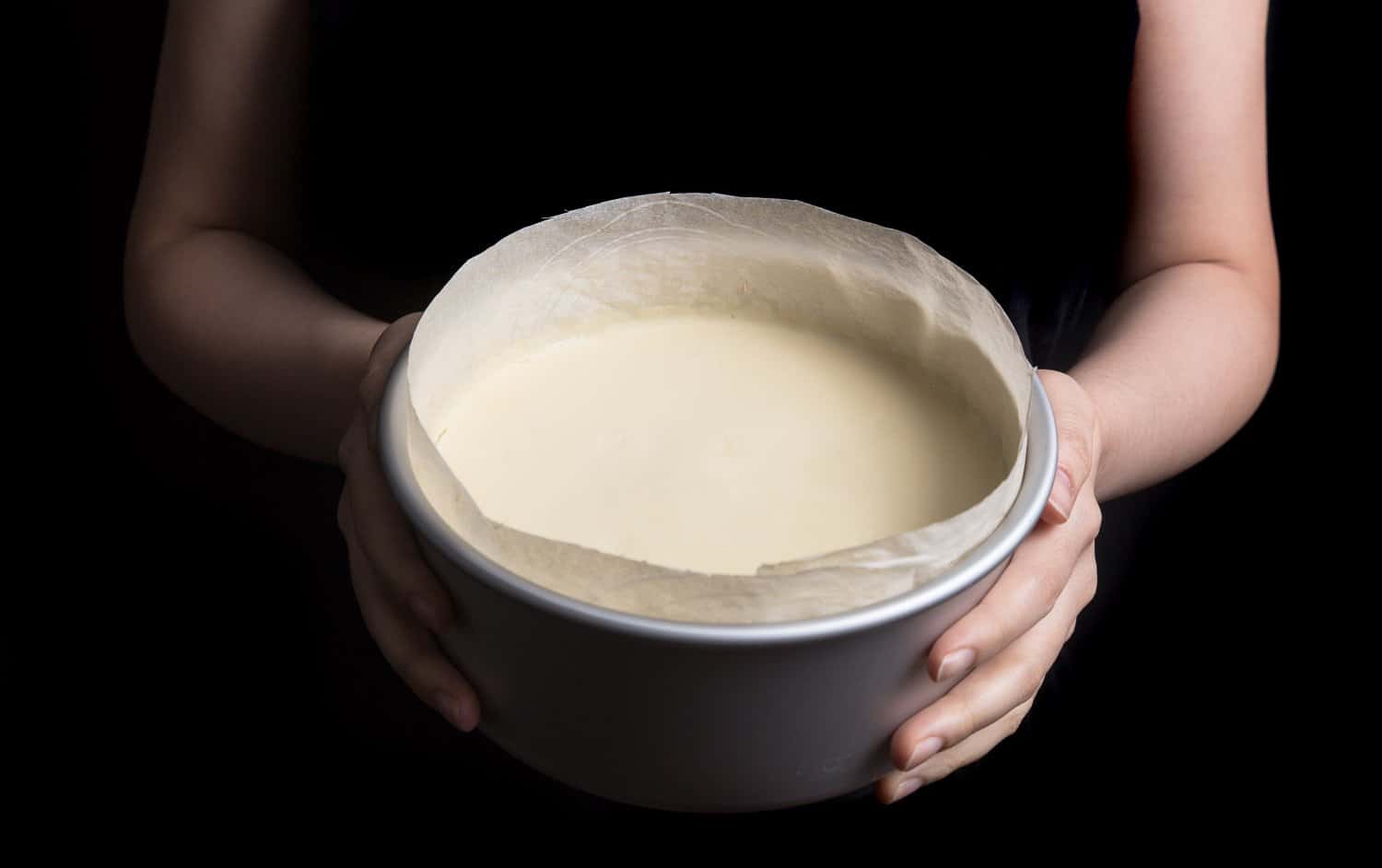 Making Pressure Cooker Cheesecake is a piece of cake. To make it almost perfect in the pressure cooker is another story. I would be lying if I told you our first pressure cooker cheesecake was stunning. In fact, it took us 16 tries.

Imagine the excitement on my mother’s face when she received her share of our 16th cheesecake in 2 months! 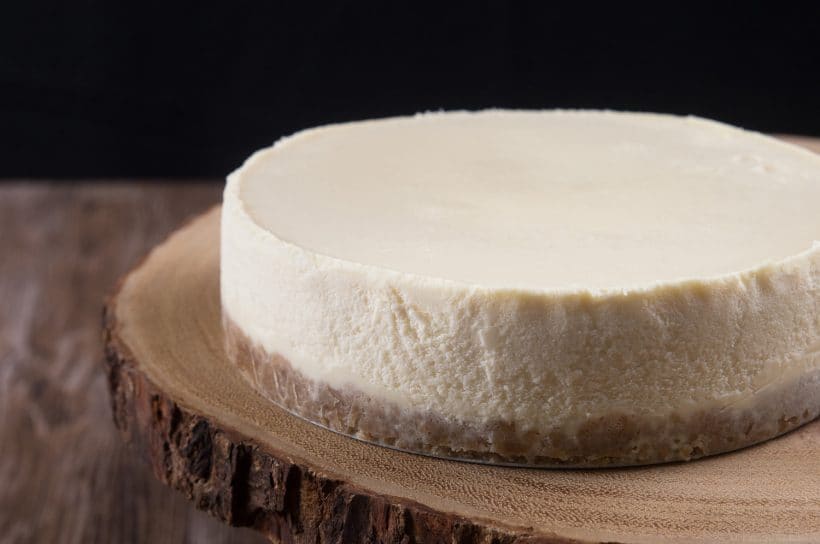 An almost perfect pressure cooker cheesecake should look and taste great. Relatively smooth surface and side with minimal air bubbles.

You can click on the tips one by one or read them all. Have fun! 🙂 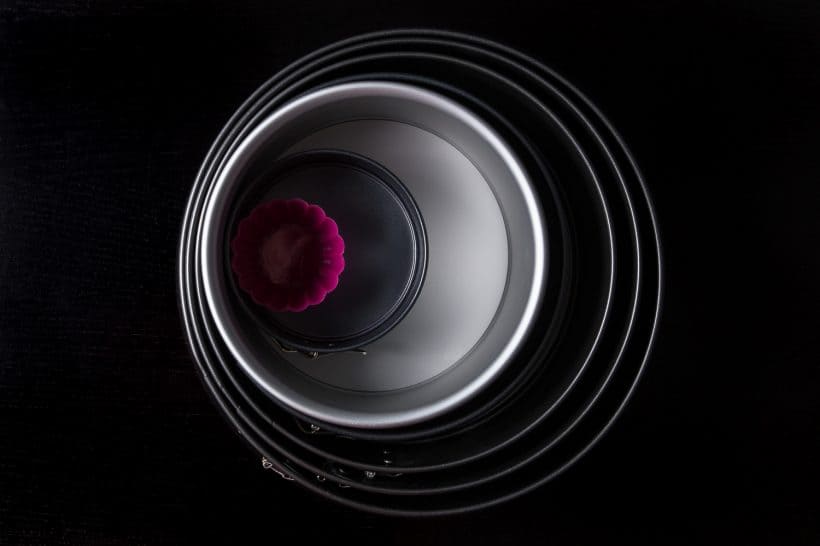 Both Fat Daddio's Cheesecake Pan (with removable bottom) and non-stick Springform Pan are great for making pressure cooker cheesecakes. The pink silicone cups from IKEA are great as well.

Tip 2 – Cream Cheese
How Many Packages Do I Need?

In US, 1 package of Philadelphia Cream Cheese Block is 8 ounces (226g).

Despite the name, cheesecake is more of a custard on a crust than an actual cake.

Cornstarch: Adding a small amount of cornstarch to the cheesecake improves the overall texture without changing the flavor profile. It also helps prevent the cheesecake from cracking.

Room Temperature: The secret to a lump-free cheesecake is to start with cream cheese, sour cream, and eggs at room temperature. *We will elaborate on this in the techniques section.

Lining the container with parchment paper is not crucial for great tasting pressure cooker cheesecake.

But if you want a smoother finish and cleaner release (especially with Fat Daddio’s Pan), we recommend lining the container with parchment paper on the bottom and the sides.

From our test results, silicone cups from IKEA do not need to be lined with parchment paper.

Freezing vs Blind-Baking: We did a direct comparison between the two different methods. 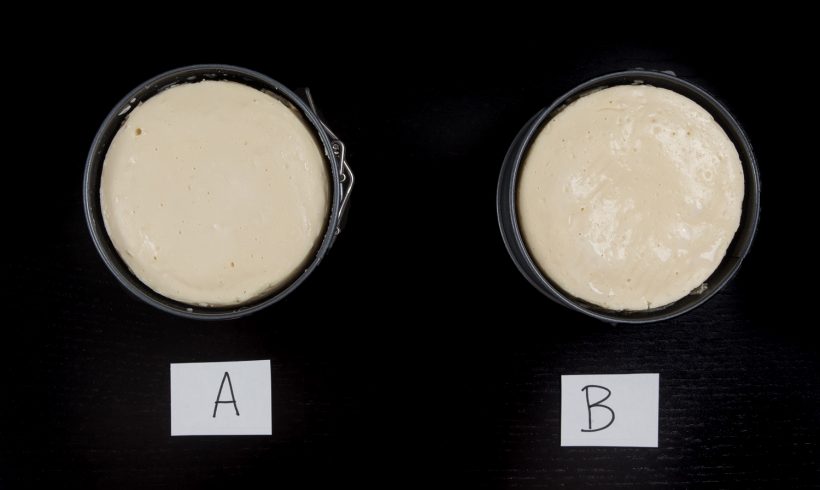 In our blind taste test, the baked crust was noticeably firmer and crisper when compared to the freezer version (method 1).

If you like a crisper crust, we highly recommend baking the crust in the oven for 15 minutes at 325°F.

On a side note, noticed the air bubbles on the surface? We will tackle that in a bit.

To get a more even crust layer, use flat objects such as measuring cup or container to firmly press down the crust. Use a small spoon for the edges.

We always see recipes telling us not to overmix the pressure cooker cheesecake batter. But why?

During our 16 tests, we tried mixing our cheesecake batters a few different ways:

Here are the conclusions:

*Click on the method you prefer for further insturctions

If you like a firm and dense cheesecake resembling a New York Cheesecake, here is the method we used:

Remember: the less you mix the batter, the firmer the cheesecake will be.

If you like a creamy and tender cheesecake, this method is for you:

Cause: Overmixing the eggs create a lot of air bubbles.

Prevention: blend in the eggs one at a time until incorporated. It should only take 15 – 20 seconds per egg with a hand mixer.

Tip 8 – Cracking
Why Did My Cheesecake Crack?

Cause #4: Cheesecake Sticking to Container’s Sidewall

Cheesecake will continue to shrink in size during the cooling process. If the cheesecake happens to stick to the sidewall of the container, the cheesecake may crack.

Solution: After cooling for 10 to 15 minutes, carefully run a thin paring knife between the sidewall and the cheesecake or parchment paper to release the cheesecake from the container. 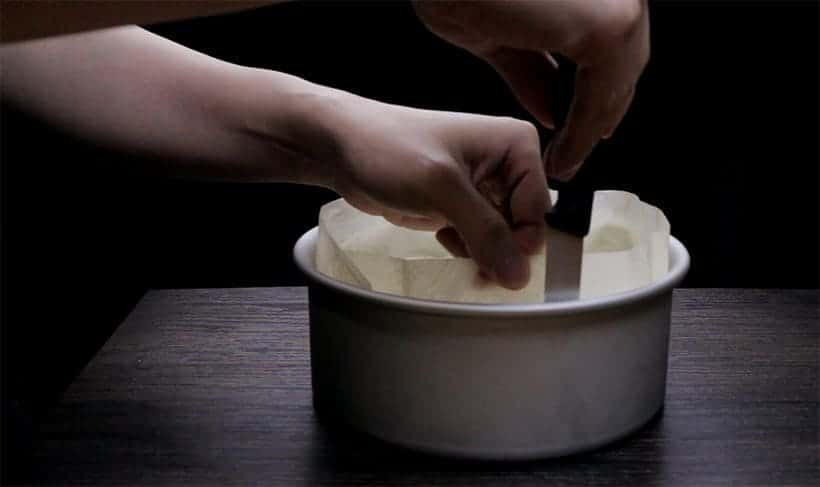 Cause #5: Sudden Shift of Temperature 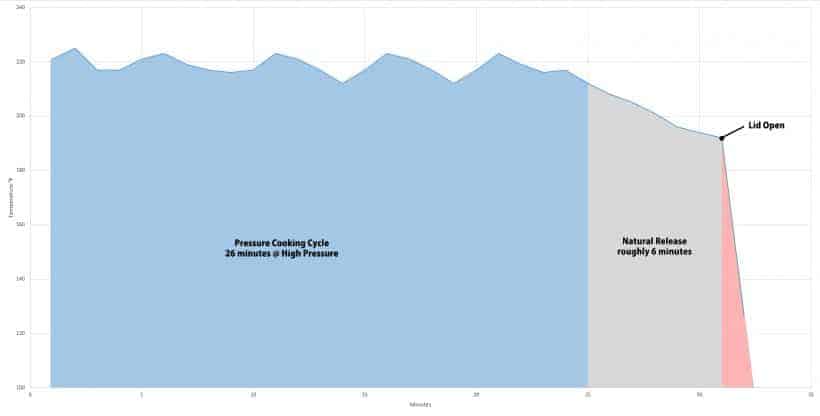 We recorded the temperature inside the pressure cooker during our experiments. There’s a sudden shift of temperature when we opened the lid.

The steam rushing out of the pressure cooker causes the temperature to rapidly decrease from 192°F to 126°F within a few seconds.

This sudden shift of temperature causes the expanded cheesecake to rapidly shrink. If the cheesecake was slightly under-cooked, cracking may occur.

Solution: open the lid very slowly to allow the temperature of the cheesecake to decrease more gradually.

Cause: Condensation build-up happens during the “going up to pressure” stage and natural pressure releasing stage.

Method #1 – Aluminum Foil: One option to avoid condensation is to wrap the cheesecake tightly with aluminum foil. With this method, you will need to increase the cooking time by ~30%.

Remember, cheesecake batter will expand under pressure in the pressure cooker. If you are using the aluminum foil method, do not fill your cheesecake pan more than 80% full or it may look like this…

With some elementary scientific calculations, we found that the dents on cheesecakes’ surfaces are mostly caused by the condensation build-up during the “going up to pressure” stage. So, we came up with a second method. 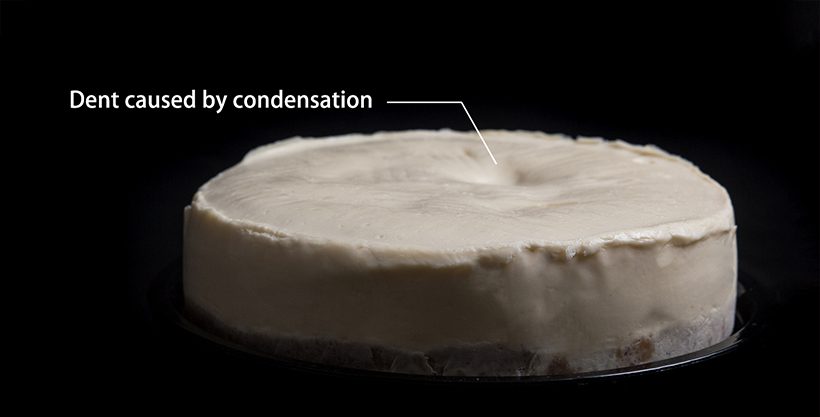 Method #2 – Start with Boiling Water: For a smooth surface cheesecake, wait until the water in the pressure cooker boils before placing the cheesecake in.

Once you close the lid, the floating valve should go up quickly and pressure will be achieved in less than 1 minute. You will have to add 2 -3 minutes to the pressure cooking time to compensate.

Tip 10 – Doneness
Is My Cheesecake Done?

The very center (about 2″ – 3″ for a 7″ cheesecake) of a perfectly cooked cheesecake should still jiggle when you move it from side to side.

At this point, you can remove it from the pressure cooker or just leave it in the turned off pressure cooker and let it come down to temperature more gradually with the lid open.

Why? Because the butter has hardened.

The easiest way to release the pressure cooker cheesecake is to warm the bottom of the pan to melt the butter. You can use a torch or heating pad for this step. 🙂

I would love to make the Perfect Pressure Cooker Cheesecake, but I think my mother will start to hate me with Cheesecake #17.

After 16 trials, I am proud to say we have developed our New York Cheesecake Recipe. 🙂 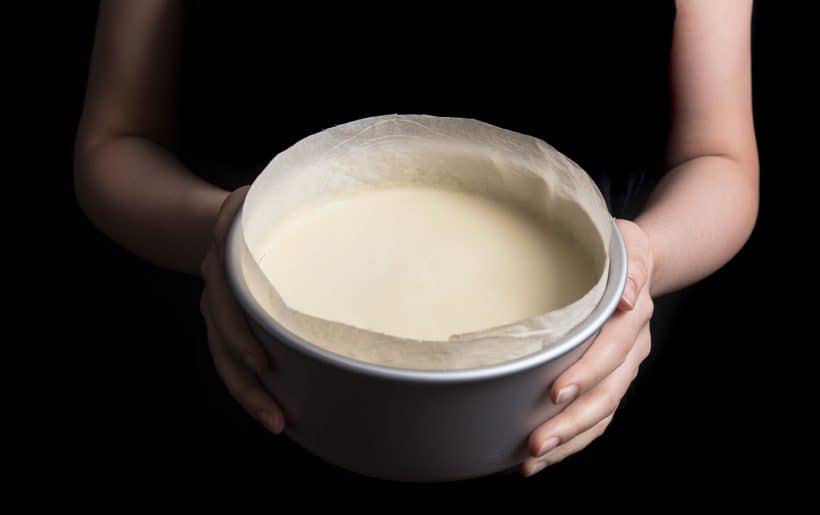 From Jacky the food nerd 🙂 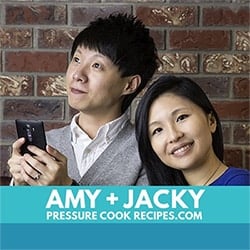